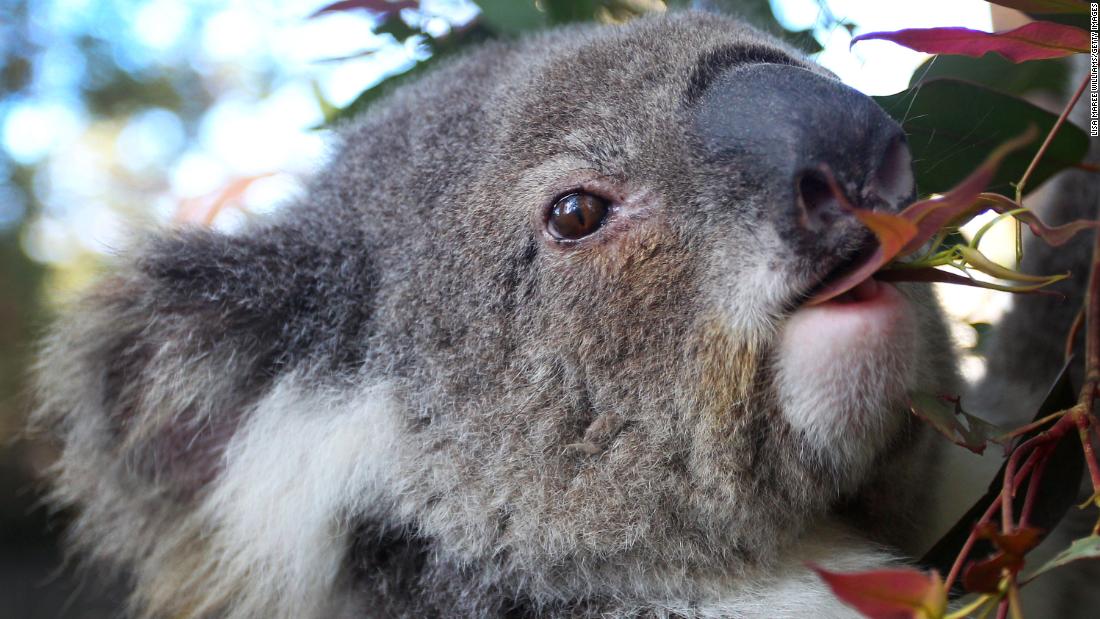 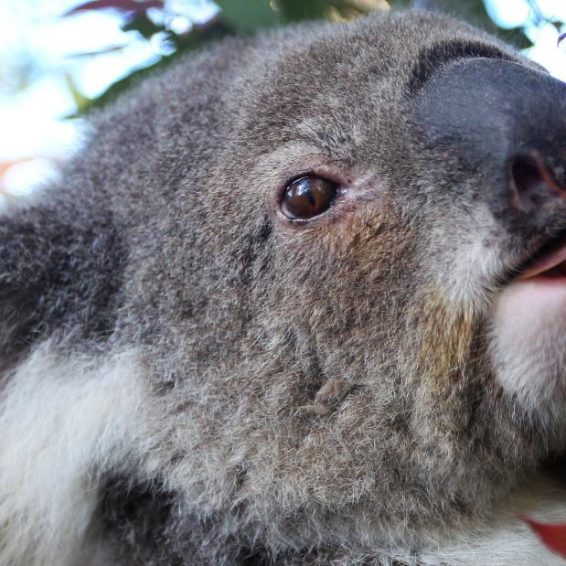 Koalas are dying from chlamydia, and climate change is making it worse

1 month ago·6 min read
ShareTweetPinShare
Home
World News
Koalas are dying from chlamydia, and climate change is making it worse
The content originally appeared on: CNN
The culprit is chlamydia, a sexually transmitted virus that infects more than 100 million people worldwide annually and can cause infertility in humans if left untreated.
For koalas, uncontrolled chlamydia can cause blindness and painful cysts in a animal’s reproductive tract that may lead to infertility or even death.
Worse still, antibiotics used to treat the disease can destroy the delicate gut flora koalas need to consume their staple diet of eucalyptus leaves, leading some to starve to death even after being cured.
The disease can also spread quickly.
Read More
In 2008, there was a “very, very low chlamydial prevalence” — about 10% — in the koala population in Gunnedah, a rural town in northeast New South Wales, according to Mark Krockenberger, a professor of veterinary pathology at the University of Sydney.
By 2015, that figure had risen to as high as 60%. Now, about 85% of that koala population is infected with the virus, Krockenberger said.
“If you think about it, that’s not a viable population anymore because of infertility. Pretty much every female that’s infected with chlamydia becomes infertile within a year, maybe two years maximum … Even if they survive, they’re not breeding,” he said.
Experts say situations like that in Gunnedah are playing out among koala populations across Australia, threatening populations already vulnerable to worsening bushfires and habitat loss due to deforestation.
Scientists are now trialing vaccines against chlamydia to protect the animals.
“We run a very high risk, if this vaccine strategy doesn’t work … of localized extinctions,” Krockenberger said.

Are koalas endangered in Australia?

There are few more emblematic Australian animals than the koala.
The gray, fluffy-eared marsupial, which eats leaves from the eucalyptus tree and carries its young in its pouch, can only be found in Australia and is regularly seen in cultural representations of the country.
But koalas face a number of threats to their survival. Apart from disease, the marsupials suffer habitat loss and are often attacked by wild dogs and hit by cars.
The koala is listed as “vulnerable” on the International Union for the Conservation of Nature’s (IUCN) Red List, which catalogs species at risk of extinction. The IUCN says there are between 100,000 and half a million koalas in the wild, but the Australian Koala Foundation says the number is closer to 58,000.
Confusion about the size of Australia’s koala population inspired the government to commit 2 million Australian dollars ($1.47 million) last year to a national koala census to work out where they are and how many are left.
The country’s koala population suffered severe losses during the catastrophic bushfires of 2019, which destroyed more than 12 million acres (48,000 squares kilometers) of land across New South Wales alone.
The fires killed or displaced nearly 3 billion animals, according to the World Wide Fund for Nature (WWF). That figure includes more than 60,000 koalas that either died, lost their habitat or suffered injury, trauma, smoke inhalation and heat stress from the flames.
In mid-2021, an Australian government report on the conservation status of koalas recommended the animal’s status be changed to “endangered” in Queensland, New South Wales and the Australian Capital Territory, as a result of the rapid population decline in those areas. In some regions, the report found populations had almost halved over just 20 years.
The Australian government is drafting a National Recovery Plan for the Koala which will be reviewed in December 2021 before potentially becoming law in 2022.
But Deborah Tabart, chairman of the Australian Koala Foundation, says much more needs to be done to protect koalas and their habitat across the entire country, warning the marsupials could be wiped out within three generations.
“We want a Koala Protection Act,” she said. “If you really are serious about protecting this species you would have legislation that is effective and that means protecting the trees,” she said.
Campaigners say it would be akin to the Bald Eagle Act in the United States that protects the country’s national emblem from threats to its population and habitat.

How does chlamydia spread?

When faced with the threats to the koala’s habitat and food supply, chlamydia might seem like a secondary issue.
But with numbers dwindling, experts said reproduction has never been more important.
There are two varieties of chlamydia in Australian koalas, one of which, chlamydia pecorum, is almost entirely responsible for the most severe cases of the disease in the population.
A paper published in September 2020 in FEMS Microbiology Reviews said the more dangerous strain of chlamydia may have originated in domestic livestock brought to Australia by European colonizers in the 19th century.
The disease spreads in koala populations through reproduction and social behavior connected to mating, though joeys — baby koalas — can catch the disease from their mothers.
According to the University of Sydney, infection rates in some populations of mainland koalas in Queensland, New South Wales and Victoria can be as high as 100%, rendering them entirely infertile.
Highlighting the virus’ lethal potential, a study in the Journal of Applied Ecology in March 2018 found that of 291 koalas examined over four years, 18% had died of chlamydia or related complications.
Disease was the second highest cause of death, after animal attacks.

The climate crisis has made Australia more vulnerable to devastating bushfires, such as those seen in 2019, as well as drought and heatwaves. It’s also making koalas more susceptible to disease.
According to Australia’s leading scientific body, the Commonwealth Scientific and Industrial Research Organisation (CSIRO), the country has already warmed by about 1.44 degrees on average since 1910.
The Australian government report said when the marsupials are exposed to unusually stressful environmental conditions, including “hot weather, drought, habitat loss and fragmentation,” chlamydia spreads more quickly through their population.
Experts say they have witnessed similar rapid explosions of disease in the wild. Krockenberger said in his Gunnedah sample population, a series of heatwaves and droughts in 2009 and 2010 preceded a doubling of chlamydia cases.
Peter Timms, professor of microbiology at University of Sunshine Coast in Australia, said once koalas’ stress hormones rise due to environmental problems, infections often progress from a relatively minor problem to “one that is more serious.”
He said a combination of habitat loss and climate change is causing koalas to be “chronically stressed,” depressing their immune systems.
“All that leads to poor chlamydia response. It gets them from low grade chlamydia infections to more serious disease,” he said.
“That’s what we’re doing to them. And we’re doing it on all fronts.”

But help could be on the way for Australia’s koalas.
A chlamydia vaccine, developed by researcher Timms over the past decade, is being tested among the country’s koala population as a way to protect the animals from serious infections.
Control trials are ongoing to test the effectiveness of the vaccine on small groups of koalas — often about 20 or 30 at a time, Timms said. The current trial is the largest yet, involving 400 koalas.
Some koalas are vaccinated when they are brought to veterinary hospitals with complaints other than chlamydia, while others are given the shot as part of coexisting conservation efforts, he added.
“We know the vaccine can reduce the infection rate,” Timms said. “It doesn’t reduce it to zero. There are no vaccines that do that, but it quashes the infection load way down.”
He said while it is hoped the process will reduce the infection rate, it is hard to monitor the spread of chlamydia in a wild population.
University of Sydney’s Krockenberger, who is involved in a separate vaccine trial, said the purpose of the drug isn’t to reverse the progress of the disease in individual koalas. “Once they’re chronically infected, they’re often able to live reasonably happily, they just can’t breed,” he said.
He said instead the hope is that by reducing the levels of infectiousness in koalas with chlamydia, researchers will be able to prevent the virus from spreading to new hosts and thereby maintain a breeding population.
“We also hope that the unaffected animals, when they’re vaccinated, are more resistant to picking up the infection,” he said.
Timms said once the vaccine is proved to be safe and effective, he hopes to roll it out to wildlife hospitals around Australia to vaccinate any koalas who come through their doors.
He said that people often ask him how he is going to vaccinate “the last koala in the last tree” for chlamydia, to which Timms responds he’s “not even going to try.” All he can do is try to save as much of the population as possible.
After all, “these are wild animals,” he said.