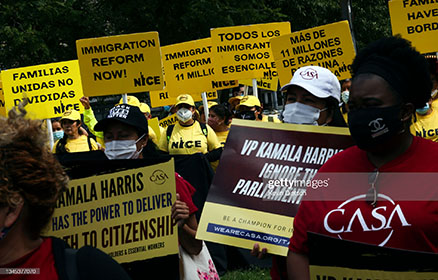 Over 75 Percent Of Immigrants In US Detention Are Not Criminals

2 weeks ago·2 min read
ShareTweetPinShare
Home
Caribbean News
Over 75 Percent Of Immigrants In US Detention Are Not Criminals
Immigration activists are escorted away by police as they rally at the White House on October 07, 2021 in Washington, DC. The group demonstrated for immigration reform and urged President Biden to authorize a pathway to citizenship for undocumented immigrants. (Photo by Kevin Dietsch/Getty Images)

That’s according to the latest data from The Transactional Research Access Clearinghouse, (TRAC), a research organization at Syracuse University.

As of October 1st, the latest data analyzed by TRAC, 16,740 out of 22,129 immigrants held in ICE detention have no criminal record. Many more have only minor offenses, including traffic violations, researchers found.

So far for 2021, the largest number of ICE detainees are at the South Texas ICE Processing Center in Pearsall, Texas. There, detention is averaging 747 per day as of October 1, 2021.

The second largest is at the Stewart Detention Center in Lumpkin, Georgia, where the daily average is 619.

Immigration activists rally near the White House on October 07, 2021 in Washington, DC. The group demonstrated for immigration reform and urged President Biden to authorize a pathway to citizenship for undocumented immigrants. (Photo by Kevin Dietsch/Getty Images)

The news comes as Mother Jones reported that even if immigrants apply and win relief from deportation, they are still kept in detention based on ICE’s appeal. There is also mandatory detention of non-citizens pending their immigration proceedings.

Mother Jones recently threw the spotlight on Sara Mendez-Morales, a Guatemalan immigrant who applied for asylum and two other forms of deportation relief with the help of an attorney.

Mendez-Morales left Guatemala in 2007 after surviving sexual abuse and sexual violence. But she then had a child with a man in the U.S., but later found out he was violent, and had hit her first daughter. Mendez-Morales contacted child protective services, but he left, and she was convicted of child endangerment. When she was released from prison in 2020, ICE picked her up and put her in detention, Mother Jones reported.

A judge spared her from deportation, but ICE appealed the decision, keeping her in detention for several additional months.

The TRAC report comes as The Biden administration recently published new rules governing immigration arrests across the country, directing U.S. officials to focus on detaining and deporting immigrants determined to pose a threat to national security or public safety, as well as migrants who recently crossed the southern border.

In a long-awaited memo, Homeland Security Secretary Alejandro Mayorkas outlined a dramatic shift in U.S. immigration enforcement policy that will likely spare most undocumented immigrants who have lived in the U.S. for years from arrest and deportation, as long as they don’t commit serious crimes.

The biggest shift from the February rules is the new “public safety” threat category, which currently directs deportation agents to seek the arrest of immigrants convicted of an “aggravated felony,” as defined by U.S. immigration laws, or those accused of participating in a criminal gang.

Mayorkas’ guidelines dictate that immigrants should not be arrested because of their race, religion, gender, sexual orientation, gender identity, nationality, political views or expressions of their First Amendment rights. The rules also instruct officials to ensure arrests are not used as a “tool of retaliation” against undocumented tenants or workers who are being exploited by unscrupulous landlords and employers.