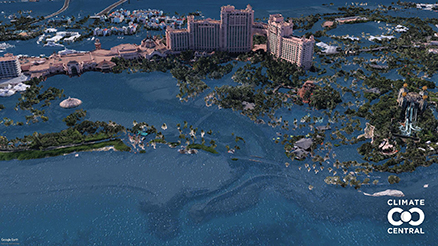 The two identified are Havana, Cuba, and Paradise Island in the Bahamas.

Scientists at the non-profit Climate Central have used vivid imagery to project what both areas would look like if carbon pollution is cut by 1.5 percent, and if we continue on the current path, which will see global warming increase by 3 percent.

The images show projected future sea levels at Plaza de la Catedral in Havana, Cuba due to human-caused global warming under two different scenarios. With a 1.5 percent cut, the city stays pretty much the same while with no cuts, the city could fully disappear under the sea.

Cuba now and in the CC future cast.

The same is predicted for Paradise Island in the Bahamas, home to Atlantis. In the case of Paradise Island, the only buildings left standing were the high rises as everything else was submerged in water.

Deportations To Haiti Could Reach 1,000 Per Day

But the slightly good news the scientists say is that these projected sea levels may take hundreds of years to be fully realized.

The COC photorealistic visuals illustrate what would happen in 50 major coastal cities globally if the world follow through on its inadequate climate pledges versus steep emissions cuts needed to keep global warming within 1.5 degrees Celsius (2.7 degrees Fahrenheit) of pre-industrial levels.

If the world fails to do the latter, the land that 10% of the Earth’s population calls home lives would need to implement “globally unprecedented” changes to cope with rising seas or risk being swallowed by the ocean.